The future of transportation is undoubtedly green, but how we get there and what technologies are going to dominate the transition away from fossil fuels is still an open question. When it comes to passenger vehicles, the usual assumption is that electric vehicles (EVs) are the clearest path forward. However, EVs face a number of obstacles that are making another technology incredibly appealing to auto manufacturers. In short, the main obstacles facing EV’s are the number of drivers without access to off-street parking, the increase in demand from electrical power grids, and the extended charging times. What technology doesn’t face these obstacles? Hydrogen fuel cell vehicles (FCEVs).

Arguably one of the largest obstacles to an all-EV future is an obvious practical problem, and that is the number of drivers without access to off-street parking. Owners of EV’s can say goodbye to regular visits to the gas station, but without the ability to park the vehicle in a garage or at least off the street near their home, charging an EV is going to be a major frustration. According to the National Multifamily Housing Council, in New York alone 24% of residents are renting apartments, a significant number of which don’t have access to a garage or driveway. In the UK there are roughly 9 million drivers without access to off-street parking. In some densely populated communities where homes are constructed closer together, even homeowners are parking their cars on the street.

A second obstacle for the future of EVs is going to be the increased demand on the power grid. Current electrical consumption is rather high, and some grids struggle to keep up during certain seasons because of electrified home heating and cooling during the coldest and hottest months of the year. Transitioning every vehicle would significantly add to current demand and potentially result in more local blackouts. Analysts have estimated that if every vehicle in the United States switched to EV’s there would be a 25% rise in electricity demand. For this to be in line with the goal of a transition to EV’s – which is to reduce emissions, then this increase in power needs to be generated from renewable sources.

The other major hurdle for EVs is charging times. Currently, the fastest charging stations out there can charge an EV up to 80% within 30 minutes, but many homeowners are looking at charging times as long as 9 hours with a 220V outlet. While new battery technologies are in the works, such as improved lithium-ion batteries and solid-state batteries, these aren’t expected to be commercially available until near 2030 and will require additional manufacturing ramp-up and adoption time.

Why FCEV’s Have a Promising Future

The obstacles to EV adoption already stated are reasons why 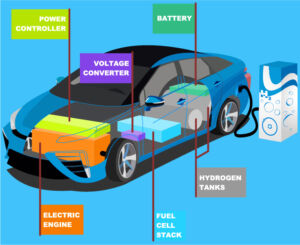 manufacturers like Toyota, Hyundai, and Honda are already increasing their manufacturing capacity for FCEVs. Hydrogen-powered vehicles don’t face these obstacles because they have zero reliance on the grid. This is true for both consumer and commercial vehicles. While hydrogen does require some energy input, this energy can be generated independent from current demand, and the hydrogen can be supplied to fueling stations virtually anywhere. This is a model incredibly like current gasoline vehicles, where fuel is produced in large quantities at large production facilities, and this fuel can be supplied across incredibly expansive distribution networks.

This means that drivers can have a zero-emissions vehicle that is refueled much the same way they refueled gasoline and diesel-powered vehicles. Whether or not an FCEV owner has off-street parking, there is no need to figure out the charging situation. Hydrogen-powered vehicles can fill up on hydrogen at gas stations, add no additional demand to power grids, and can fill up on hydrogen in minutes.

While hydrogen does face some obstacles as well – such as the need for more hydrogen fueling stations or for existing gas stations to add hydrogen pumps, this is a much less expansive ask than having to increase renewable power generation alongside a dramatic increase in access to charging stations.